Workshop and Art” treating about historical fascination of the Western World with Japanease Art. Marek Skwara puts Toyota Showroom in Katowice which realizes an idea of transprogramming in Japanease poetics in this context. Additionally, a conversation entitled “ Public Space and Visual Culture” moderated by Marian Oslislo and a cover photo of “Fire Museum” in Żory by OVO Grąbczewscy are present in this edition, too.

In 2019, the Festival of Polish Culture is held in Japan on the anniversary of the centenary of the establishment of official diplomatic relations between Poland and Japan. As part of its celebrations, an exhibition of 21 Polish and Japanese artists and collectives was opened in May in Kyoto. But the fascination with the Land of the Rising Sun in Poland, Europe and North America goes back to more distant times.

Japan, after centuries of conscious isolation of the country, on April 6, 1868, opened itself to the world. It was then that Prince Matsuhito, elected as emperor, announced an oath in which he proclaimed in the fifth point that from now on the Japanese would seek knowledge around the world, which would strengthen the foundations of the empire. This decision gave rise to the violent opening and acceleration of the country's development, which characterize the Meiji decade, and the fruits of the imperial decision are being reaped by the Japanese to this day. And although European missionaries and merchants were present in Japan from the mid-16th century, it is only since the imperial proclamation that the increased interest of Europe and North America in remote islands on the fringes of the Pacific, also known as "Japanism", dates back. Impressionists, Art Nouveau and Young Poland artists were delighted with the Japanese flowing line, dynamic composition, the role of the plane and empty space, Ukiyo-e's Ukiyo-e's calligraphy and woodcuts. Architects have been seduced by the logic and simplicity of Japanese mansions and tea pavilions. Many people were fascinated by this, from Charles Rennie Mackintosh, Henry van de Velde, through Frank Lloyd Wright to recently Krzysztof Ingarden in Poland.

The MG Centrum Toyota facility is primarily a car showroom and service point. But due to the emerging unusual needs and phenomena in the modern world or the willingness to initiate them, it was decided to juxtapose customarily incompatible functions. This kind of reprogramming is a sign of our times. The showroom features a complex of independently available offices for rent, as well as a Japanese restaurant with an insight into the workshop hall, the operation time of which goes beyond the salon's opening hours.

An art gallery is located in the open space of the main hall through two floors. The inauguration of the Aya gallery was organized by the MG Center in cooperation with the Academy of Fine Arts in Katowice and the Manggha Center of Japanese Art and Technology in Krakow. The opening was inaugurated with the exhibition of the famous Japanese artist Kiyokatsu Matsumiya, whose Japanese washi paper objects not only filled the exhibition walls, but also hung from the hall ceiling and stood in the main hall.

Designers enjoy the fact that they managed to create a harmonious triad together with the Investor and the Contractor, without which a good investment could not be created in synergy. This time, the result of this cooperation was the largest Toyota showroom in Poland at that time, the form of which, although not a quote, evokes associations with Japanese architecture - thanks to the way of space formation, the ubiquitous transparency of transparent and frosted glass, logic and clear articulation. structure of the entire facility and its internal elements, thanks to the dominant natural colors of wood, red steel structures and Japanese inscriptions appearing on various scales.

Imagine our designers' surprise when the red tubes, which were made of Kiyokatsu Matsumiya's washi paper, brought two days before the opening of the salon, turned out to be a variation on the structure pillar designed by us. Identical in diameter and color, but distorted in the artist's spontaneous gesture, multiplied, harmoniously complemented the rhythm of the columns carrying the roof structure. This magical, architectural and artistic subconscious unity and inspiration resembles a common fascination with another field of art, namely Chopin's music, which touches the sensitivity of geographically distant nations with its notes. Or maybe this shared experience should not surprise us in the era of universal globalization, because as Donald Keene writes in his essay "Japanese Aesthetics", in terms of artistic expression our era is closer to the times of Ryoan-ji (a Buddhist temple in Kyoto with the famous asymmetrical Zen garden with stones and carefully raked up fine gravel) than the Michelangelo era. 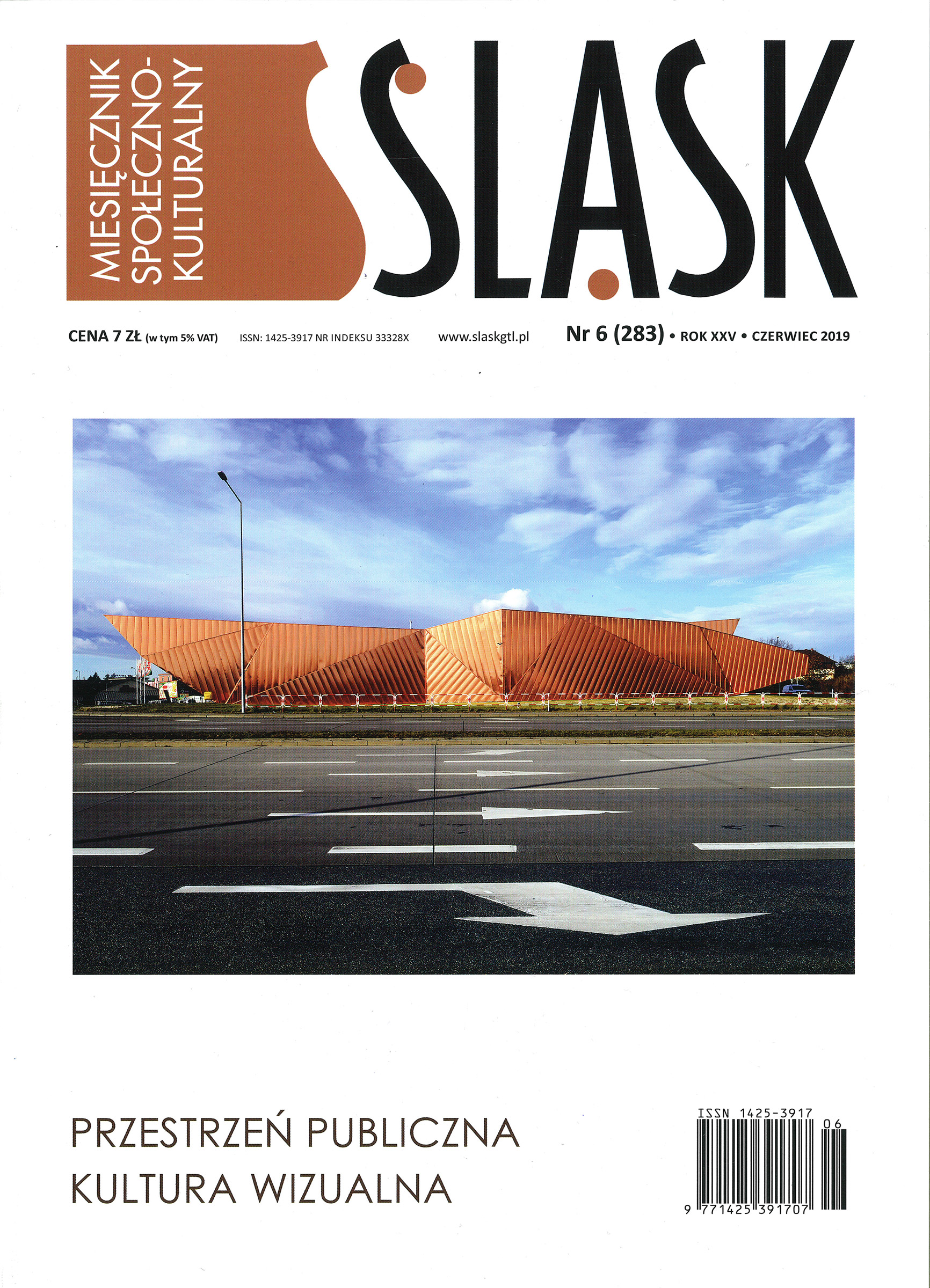 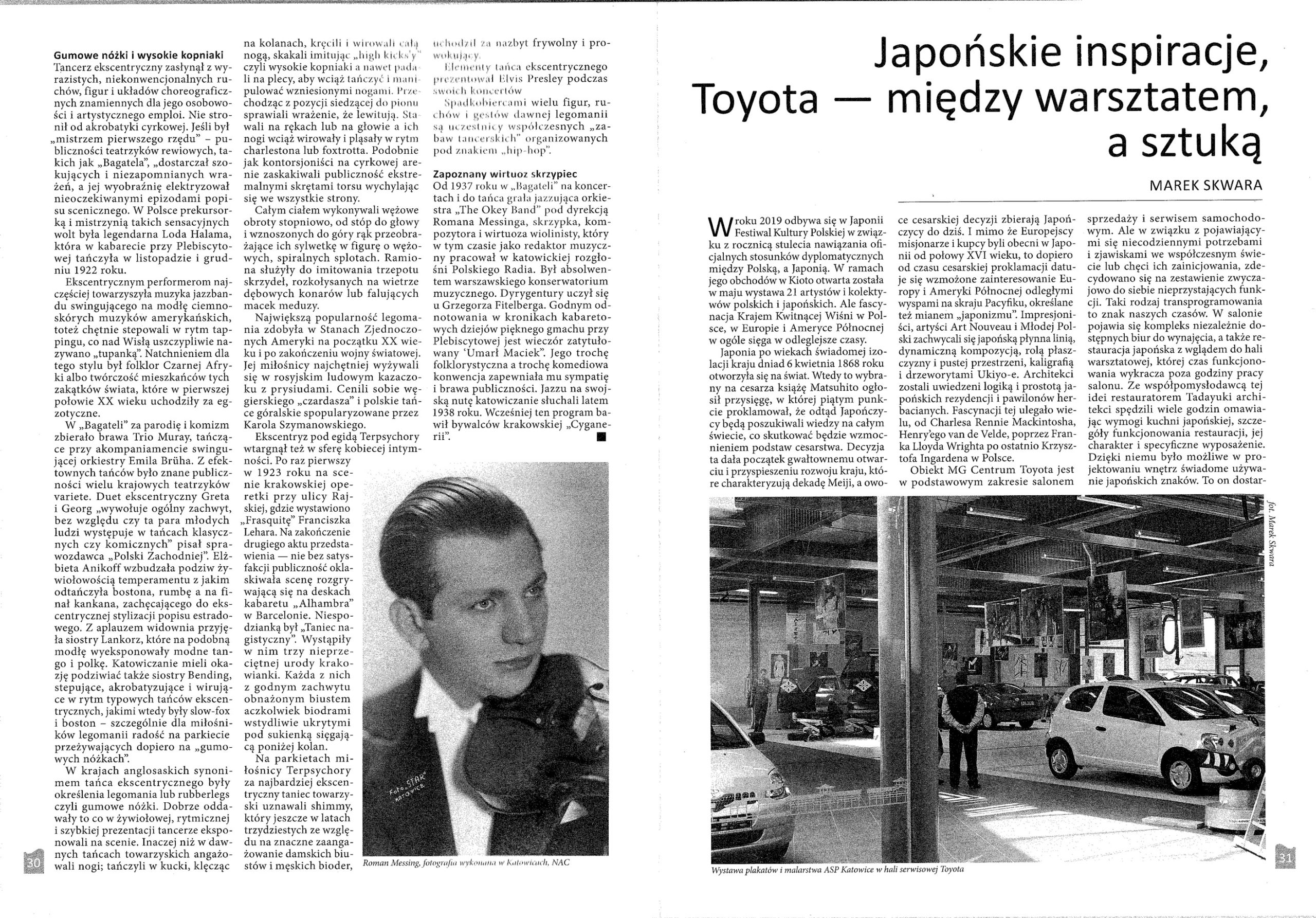 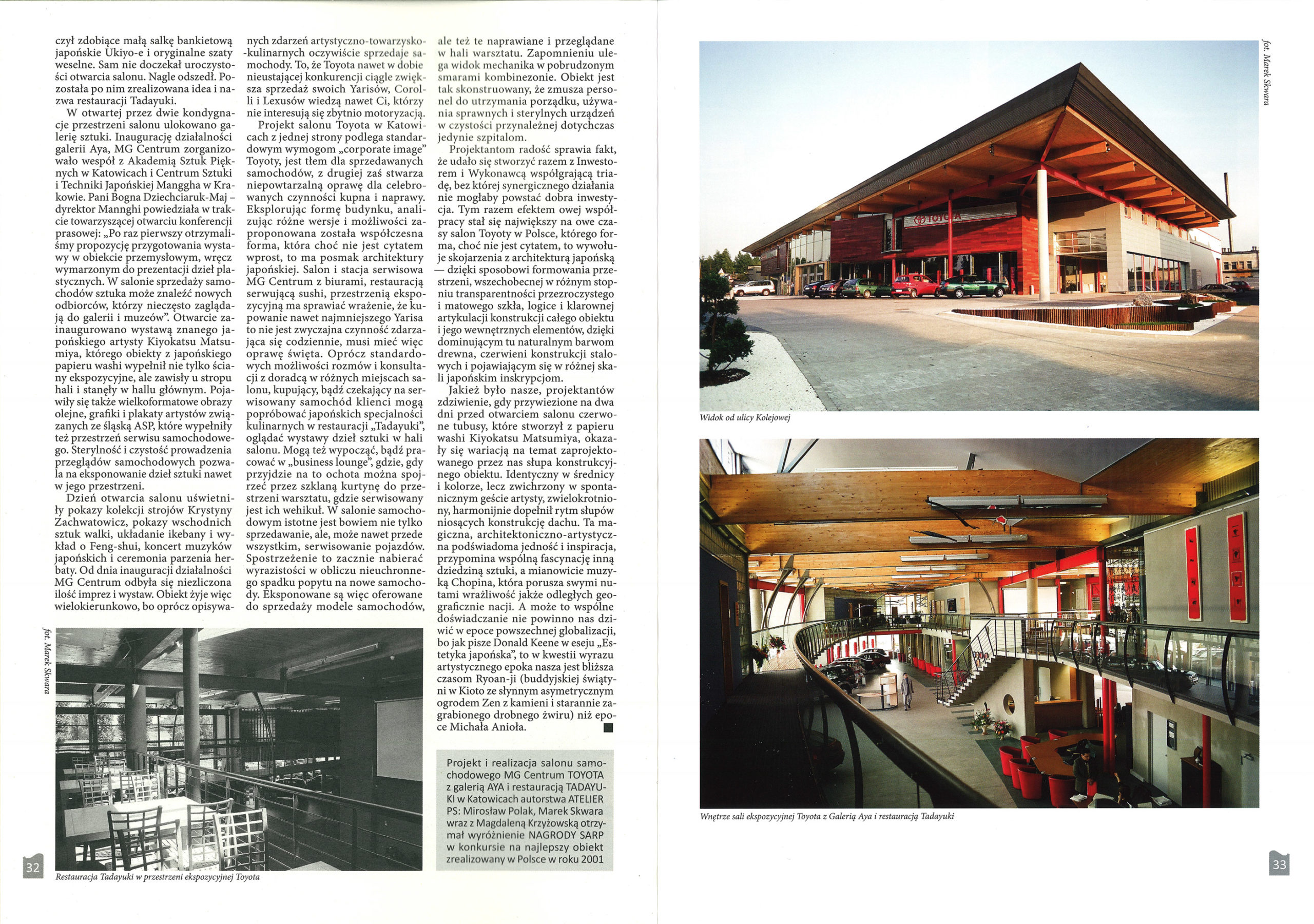 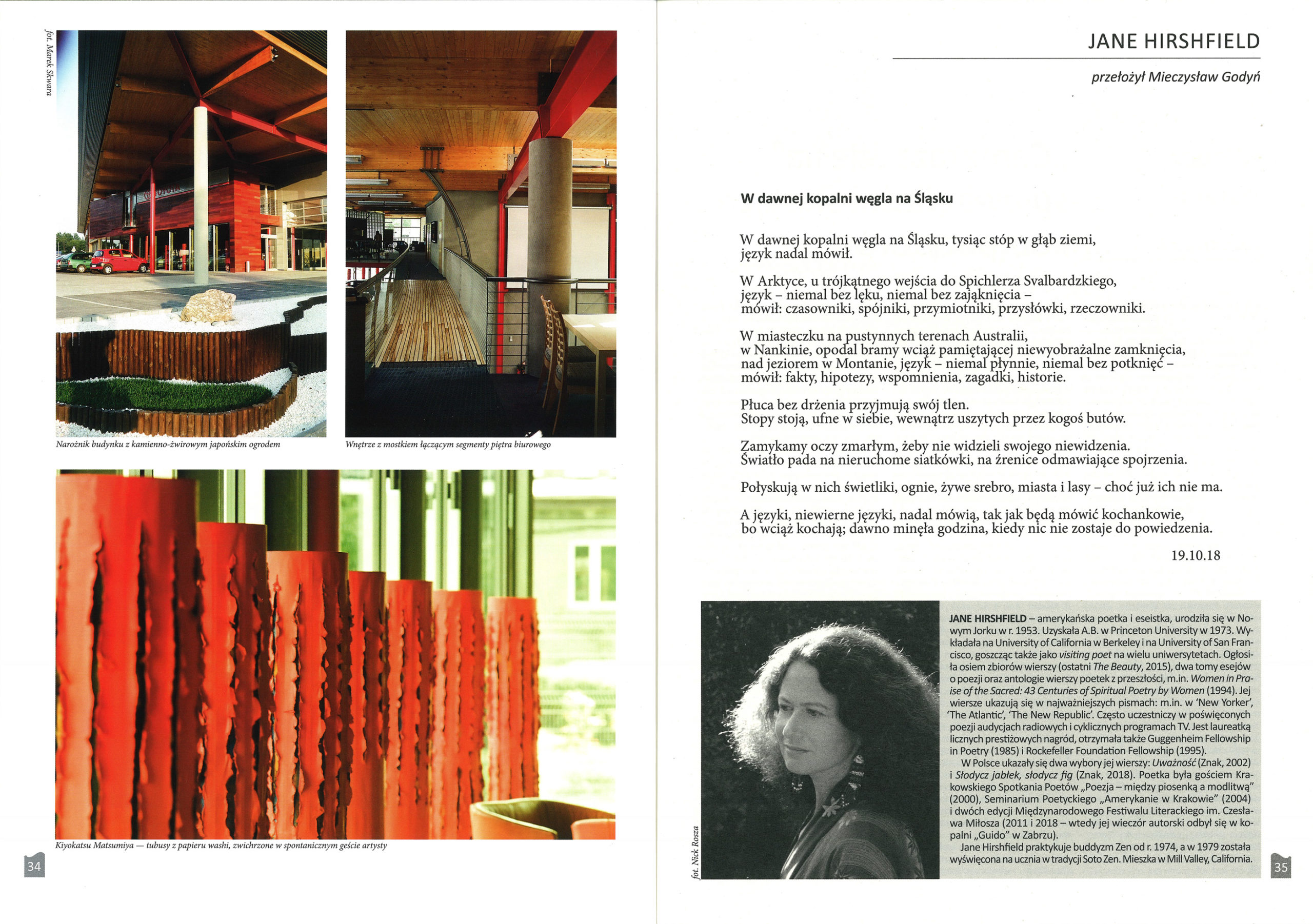